IMPORTANT: I bring a gift to one and all of you this holiday season! …It's at the bottom, so READ ON!

As one of my first guest posts state, a LOT has happened to Home Island over the years…

But what I DIDN’T say in that old post was that Home Island was at one point my FAVORITE place to hang out in!

The reason being was because there was so much to do! There wasn’t just the monkey wrench quest. There was an Arcade (which evidently, turned out to be the Pathfinder’s common room), a shop, a ‘New You’ parlor, a money wheel, a photo booth, and last but not least… THE THEATER! There was no popcorn stand when it first came out, but I came by every day to watch all the amazing screen shows the cinema had to offer. …I loved it all.

Unfortunately, all good things must come to an end. Home Island got its first remodeling in 2018, and the theater got remodeled right along with it. To be exact, it got remodeled into a giant popcorn tower! …A bouncy popcorn machine was added next to it, which was good. But every cool cartoon that ever dwelled in the theater disappeared, which was bad. Not to mention, I liked the old theater design better than a crushed popcorn box. It was just more attractive and inviting in my opinion. And furthermore, all that remained from within the remodeled theater was just one video about a clock plugged into a lemon. My only thought to that was, “Why watch that when you have the Island of ‘Survival: Distress Signal’?” 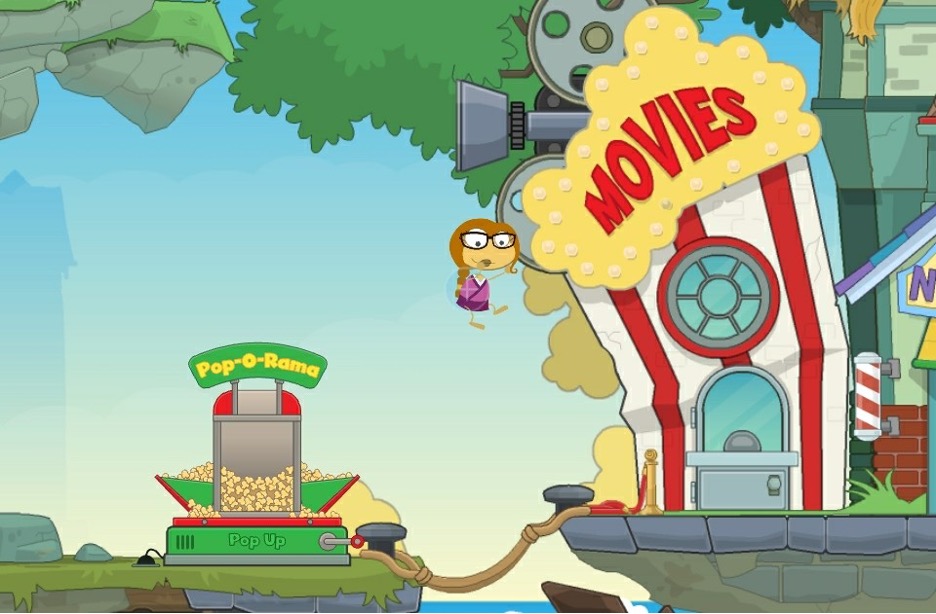 …I wanted the old theater back, and when you want something badly enough, you find a way to make it happen. And I did.

As my old post from up top states, I made a Youtube playlist for myself a while back to watch all the movies and cool cartoons from that theater again. Now, I have finally finished shining up the collection to share with all of YOU! …But is that all a girl can give?

There are some BONUS videos throughout this theater playlist, created by yours truly. …Among these, is a brand-new movie trailer. …That’s right! After creating “Battle Morale” nearly a year ago, a new feature film is finally and officially on its way!

…But, I digress. For all of you who miss the home island in its 2016-2017 glory days, I give a piece of it back to you all, with a library of only the BEST features from the Poptropica Theater… And if you like the theater and wish to see more, there’s more to find on batterypop.com! (And on my Youtube channel, I might add. (: )

Enjoy, everybody! And a very merry Christmas and a happy new year to one and all!

love this! why on earth would they get rid of the theater ??!!!?

At the time the theater was around, a lot of players were disappointed, due to the fact they thought it was something else. Plus some found the videos to be un-entertaining.

I wish I could play it

Well, when I started playing Poptropica, it was fun. But that was in 2017-2018....between those years. When I came back in 2020, it was completely changed. No more customizing characters with their outfits anywhere you want. No more tutorial island. I haven't even explored the other islands before the big update! So even after I started playing it again, I was on a mission why it just....busted the old version the way out of here. But in the meantime, I loved Poptropica and I almost forgot about the mission. But when Fierce Flyer posted the introduction about him, I saw "Fierce Flyer and Sporty Boa at the PHB's Flash Funeral for Poptropica." At first I thought it would be boring but the more I came to check if I won the Holly Jolly contest (And I did. If you want to go check which day I won, it's the 4th day.), the more I was curious about the "Flash Funeral". So one day before or after I won the Holly Jolly contest, I clicked on the "Flash Funeral" and guess what I saw. Turns out, they used to use "Adobe Flash", but it said that the company was kicked out from many sites (according to my research) and browsers. So they had no choice but to use another company named "Haxe" that erased all of the super cool islands. Thank you for your time.