Guest Post: The 2021 Poppies and Interview with Slanted Fish 🎤🐠💙

The Poppies are the annual Poptropica fan awards, hosted all throughout July by the Poptropica Help Blog. We’ve narrowed down the nominations and are currently in the voting round. Cast your votes before the ballot closes this Thursday, July 22! 🗳

You can also join us for a poppin’ Poppies party this Saturday, July 24 at 8 p.m. Eastern / 7 p.m. Central / 6 p.m. Mountain / 5 p.m. Pacific (or use a time zone converter to see what time it’ll be for you). We’ll be announcing the winners of the Poppies LIVE on our YouTube livestream and hanging out in Poptropica’s Arcade common room. Come dressed to impress!

From the hottest characters to the bougiest Poptropica name, the coolest clubhouse to the best fan art of the year, your vote helps determine the fandom favorites of the year.

VOTE NOW and we’ll see you on the blue carpet! 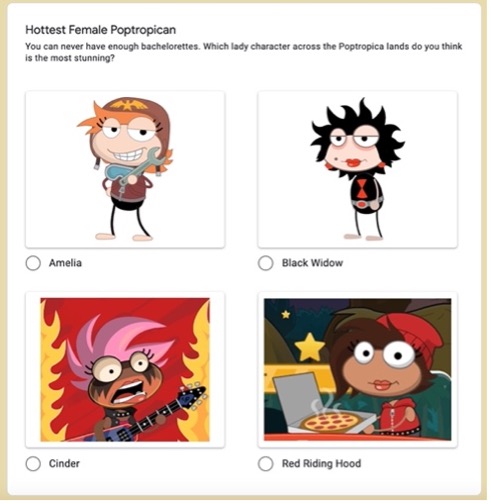 Interview with Slanted Fish from the Poptropica Creators 🎤🐠 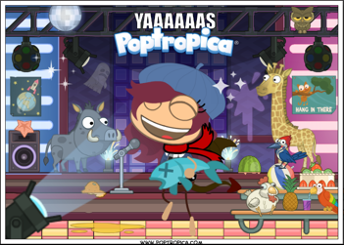 1. How were you first introduced to Poptropica?

My younger brother found Poptropica on Funbrain and introduced it to me. Back then, we would go on Funbrain to read Jeff Kinney’s Diary of a Wimpy Kid before it became a printed book series!

2. Who do you think is the most underrated character? Overrated? 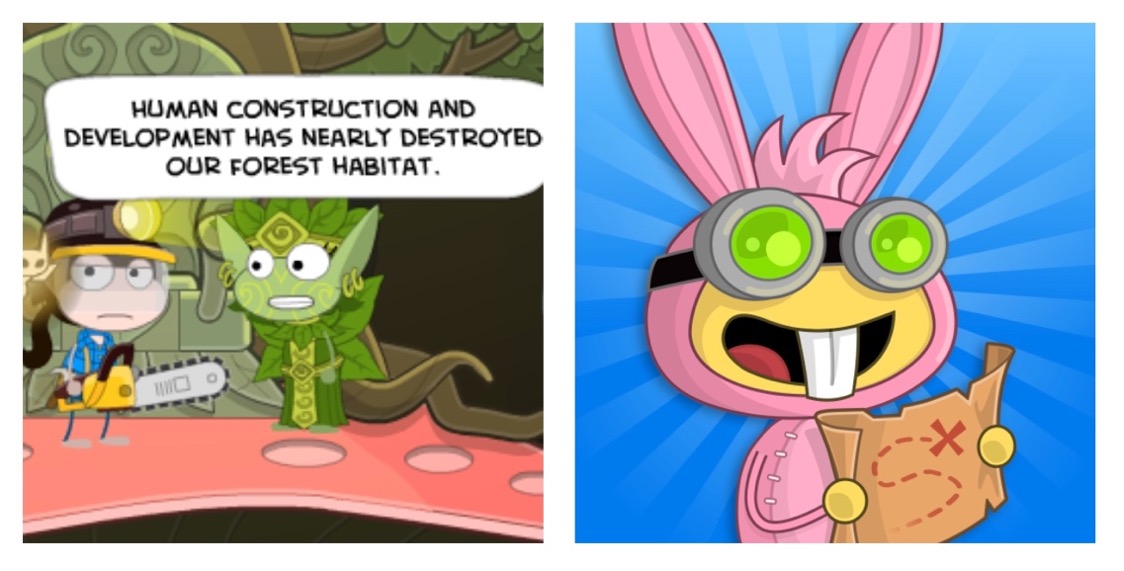 3. What are your favorite scenes, aesthetically and to play through?

It’s hard to pick a favorite scene as there are so many that are visually stunning! But to highlight a few, I love the aesthetics of the Imperial Garden on Red Dragon (especially the cherry blossom trees), and the various interactive puzzles on Nabooti, such as the mancala game and the fox-chicken-cornfeed conundrum.

4. What was your inspiration in creating and furthering the Poptropica Help Blog (PHB)?

I was inspired to create a blog after seeing lots of fan blogs for other online games I enjoyed at the time, especially Club Penguin (rip). I stumbled into a Poptropica focus somewhat accidentally when setting up the site on WordPress: while thinking about the URL, I discovered that poptropica.wordpress.com was untaken, and it felt like too good of an opportunity to pass up. So that was the PHB’s first URL, which illustrates the dearth of Poptropica fan sites at the time, and how we were able to fill that gap on the internet.

What inspired me to keep going was everything else that followed. I was amazed by how quickly the site grew in readership, fueled by all the amazing things Poptropica has been doing, especially in the heart and depth of storytelling through gameplay in its myriads of island adventures. Even as the game changes and people come and go, what I enjoy about the PHB is how it continues to be a space for Poptropicans to share their ideas, fan art, and friendships. If you’re interested, I’ve written more about this on the PHB’s Philosophy page.

5. How has your PHB career surprised you?

As the previous Q&A touches on, I’ve been surprised by the rapid popularity of the PHB (it reached 1 million views in its first year, and 13 years later, has over 35 million). But I’m not too concerned about the statistics—I’m more interested in cultivating the quality of people’s visits, and to that end it’s been a blessing to hear from so many Poptropicans over the years who’ve enjoyed what the PHB offers.

Another surprise is the creativity and intensity of so many fans’ Pop-inspired passions, which help shape what the PHB brings to the fandom, from personal My Place in Poptropica stories to discoveries of Pop Places IRL. It’s definitely not a one-person operation—credit goes to the many, many Poptropicans who make it all possible! 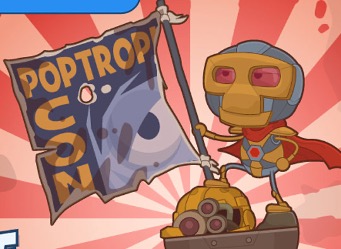 6. What does the Pop community mean to you?

To me, it’s as simple as a gathering of people who enjoy Poptropica. They can be of all ages — some are even in their twenties like me. Poptropica fans are creative (just look at all the fan art, blogs, and videos), clever (we enjoy solving puzzles and finding trivia), and concerned (we support each other and sometimes critique for the good of the game we love). Above all, we’re united in our passion for Pop!

7. From your perspective, how has the community changed over the past 12 years?

The biggest change I’ve noticed personally is that the kids have gotten older. Though Poptropica has always been aimed at kids, it’s fascinating to see how teens and young adults (myself included) still participate in the fandom, often returning from childhood nostalgia and sticking around for the community and inspired storytelling (perhaps even creating some of their own). Of course, young kids are still around. From my perspective, even children are capable of enjoying Poptropica’s more sophisticated stories, particularly those from the classic islands.

8. How have your experiences with the community and Poptropica influenced you IRL?

Poptropica’s many whimsical worlds — from the medieval madness of Astro-Knights to the genie glamor of Arabian Nights — have inspired my art and writing, and widened my appreciation for digital storytelling and cultural connections.

As for the PHB, it has given me a space to write about something I care about, to carefully consider how to express ideas, and help the blog’s staff and guest writers do the same. Having our content read by so many fellow fans is a responsibility, privilege, and a great encouragement to keep building the blessing.

The skills, friendships, and passions developed over many years of playing and creating carry over to other areas of life too. For me, that has included earning my undergrad degree in English and pursuing a career in communications. With all the diversity in Poptropica and its community comes great potential for many more Poptropicans! 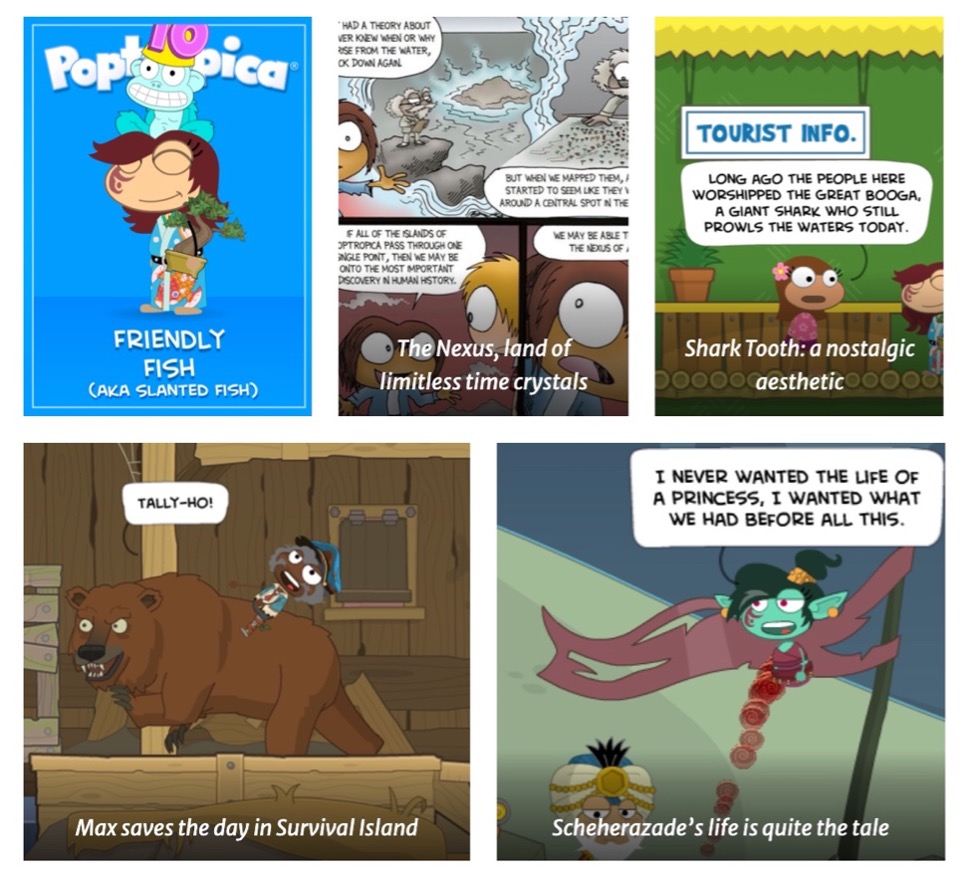 Thank you so much for sharing the latest happenings surrounding the 2021 Poppies Awards, behind-the-scenes insight into the leading fan-run Poptropica blog, and your pop-tastic interview! It’s always a pleasure speaking with you, Slanted Fish! 🐟🐡🐠💙

Please vote for me, Invisible Ring! I've been putting my Poptropica passion to the test and have made it to 5 categories in the voting polls! (My nominations are all under the name of Invisible Ring.) Whether it be one, a few, or all of those categories, your support is appreciated. Thank you!